HOW WE MET
We met 5 years ago on St Patrick’s Day at an Irish bar in our neighborhood. St Patrick’s Day was on a weekday and Jessica had no desire on going out but friends talked her into it. After spending some time at the Dub in Phoenix, a decision was made to travel onward to North Scottsdale to check out Temple Bar. Meanwhile, Tim and his roommate Eric had gone to dinner and were hanging out at home when Tim thought of the idea to go to Temple Bar to check it out. Jessica approached the bar and happened to squeeze in next to Tim who opened up conversation by pointing out Jessica wasn’t wearing green. Flash forward 4 summers later to a vacation in Maui, Tim took Jessica for a romantic walk on the beach at sunset after dinner, and asked her to spend the rest of their lives together.

THIS IS US
Since we met we quickly discovered we have a similar sense of adventure and will to try just about anything (not related to food because our fine taste in dining stops at chicken fingers and Taco Bell). We have since fine tuned our skills for spotting trip deals which has taken us to France, Spain, Netherlands, Germany, Belgium, Mexico and Hawaii. Our adventure seeking also lead us sky diving as well as hiking to Havasupai Falls in the Grand Canyon. Exploring the world is one of our favorite hobbies and while we are always scouting our next destination, we have to now introduce you to our most prized possession; BOGEY, our Miniature Golden Doodle. 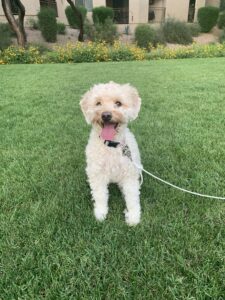